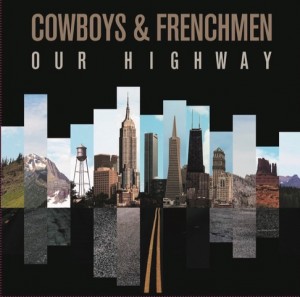 With the release of Our Highway, the inventive New York quintet Cowboys & Frenchmen reflects on the lives of touring musicians in the context of a cinematic video album that highlights the landscapes and roads that serve as the connective tissue for all of America’s towns and cities. Recorded live at SubCulture in the Big Apple, Our Highway features high-definition footage of the ensemble — front-line alto saxophonists and co-founders Ethan Helm and Owen Broder, pianist Addison Frei, bassist Ethan O’Reilly and drummer Matt Honor — juxtaposed with outdoor vistas filmed by band members over the course of their cross-country travels. While Helm and Broder shared compositional duties on Cowboys & Frenchmen’s 2015 debut, Rodeo, and its 2017 follow-up, Bluer Than You Think, Helm took the lead for Our Highway, writing all of the music and envisioning the overarching theme. Broder contributed to the concepts and perspectives explored in the video. And the distinguished producer Ryan Truesdell helps keep the album’s grand vision in clear focus. A suite-like thread of pieces collectively titled “American Whispers” weaves through the album, representing the tensions and harmonies that exist between the hectic pace of human civilization and the majesty of the natural world. “Alice In Promisedland” channels the searching spirituality of the late harpist/pianist/composer Alice Coltrane. Scenes from Americana abound in pieces like the fluttering “An Old Church” (which brings out the flutist in Helm) and “The Farmer’s Reason” (which Broder finesses on baritone saxophone). The probing “Where Is Your Wealth?” acts as a somber interlude that raises questions about personal values, and “Gig Life” celebrates the uplifting road-life experiences and bond-forging challenges one inevitably faces while traveling the nation’s highways. For Cowboys & Frenchmen, the traveling is not separate from the art. “It’s all part of one lifestyle,” Helm says in the promo materials for Our Highway. “The music is always in motion.” Unable to tour at present, Cowboys & Frenchmen will be partnering with music venues across the country to present the full video album as live-streaming events, allowing each space to offer the experience to audiences for a 24-hour period. An audio-only digital release of Our Highway is also available.