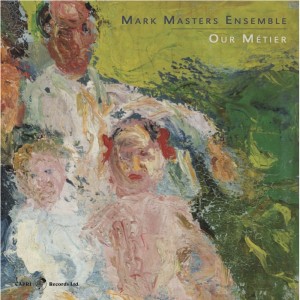 After 10 albums on which he applied distinctive arranging skills to the work of others—a group that includes George Gershwin, Clifford Brown, and Steely Dan’s Becker and Fagen—it’s only fair that Mark Masters finally gives us an album of his own writing. That he has done so in a way that trains focus on the incandescence of his soloists speaks volumes about the bandleader’s talent and intentions.

Our Métier presents itself not as an offering of a traditional big band, but a sextet working with a larger ensemble. That’s not simply a distinction between soloist and accompanist, as several ensemble members also are featured soloists; rather, it reflects the extent to which Masters uses the larger ensemble as a sort of framing device.

Given the caliber of the players here—saxophonists Oliver Lake, Gary Foster and Mark Turner, trumpeter Tim Hagans, bassist Putter Smith and drummer Andrew Cyrille—that seems a wise move. And the solos, from Lake’s mournful, fractured lines on “Borne Towards The Stars” to Smith’s sly, bluesy turn on “Lift,” are regularly astonishing. And though Masters’ writing tends a bit too much toward boppish convention, the best tunes (“51 West 51st Street,” “Ingvild’s Dance,” “Luminescence”) are hauntingly catchy, and make inventive use of the ensemble’s voices and textures, particularly Anna Mjöll’s overdubbed vocal harmonies. And the naturalness of the recording itself, from the convincingly acoustic sound of Smith’s bass to the stereo pan on Craig Fundyga’s vibes, is a delight.