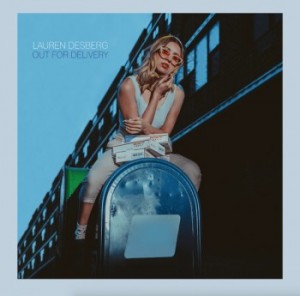 Motown founder Berry Gordy has been credited with the famous quotation, “Don’t bore us—get to the chorus.” It’s a slogan that applies to jazz-pop singer Lauren Desberg’s fat-free, 31-minute release, Out For Delivery. The album, which includes 10 Desberg compositions and two standards, is peppered with four flavorful nuggets that are each fewer than 85 seconds in duration. The listener never has time to get complacent or sated, because the program’s pace is brisk and the hooks are strong.

The album opens with “The Way You Feel Inside,” which merges modern pop production and multitracked vocals with Andrew Renfroe’s jazz guitar licks. This song’s protagonist encourages people to express themselves honestly, and, like much of Desberg’s work, there’s more depth to the lyrics than one might initially notice—thanks to the breezy melody. “Something Wrong With Me,” the tale of an unlucky-in-love narrator whose fortune mysteriously turns to sunshine, is a showcase for the production prowess of Drew Ofthe Drew, who gracefully eases Braxton Cook’s saxophone into the mix, first as a background voice deep in the echo-laden distance and then, gradually, as the featured instrument, clear and authoritative in the foreground. Also among the seven gifted musicians at the sessions was pianist Kris Bowers, who shines on the introduction to the brief closer, “The Choice.”

Desberg, drummer Jonathan Barber and Drew Ofthe Drew (who also mixed and mastered the album) ensure that the two standards—“The Sweetest Sounds” and “I’m Gonna Sit Right Down And Write Myself A Letter”—are given fresh aural twists for a millennial audience. On these interpretations (and throughout the program), fans of Norah Jones might be drawn to Desberg’s vocal delivery, which is buoyant but not lightweight.

Interpersonal relationships are central to several of the songs here, including the poignant “How Could I Have Pain,” in which Desberg examines the difficulties of human connections, crooning, “We run in stride, but still we know we’re not in the same race/ I’m on the straight and narrow while he climbs/ I’ll see him at the finish line.”