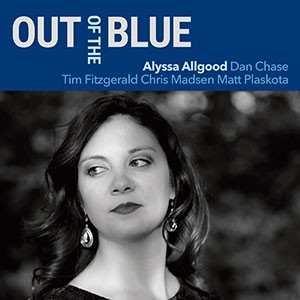 While many of today’s jazz singers are in a forward-looking mode, incorporating a number of contemporary genres and styles, along comes Alyssa Allgood, who heads back to the 1950s and ’60s for her debut album.

Allgood, winner of the 2014 DownBeat Magazine Student Music Award for Best Undergraduate Vocal Jazz Soloist, is a winner here, too.

Allgood is a native of Chicago, a city well known for producing outstanding musicians, and she managed to find some all-around terrific players for this outing, including Chris Madsen on tenor saxophone, Dan Chase on organ, Tim Fitzgerald on guitar and Matt Plaskota on drums.

She scores a double with her opening “Watch Me Walk Away,” a contrefact of “Dig Dis” that deals with the prominent issue of when to leave an abusive relationship, and elsewhere shows off her considerable scatting technique.

At this point in her young career, she seems more confident as a scatter than as an interpreter of lyrics, but otherwise, she is well rounded and grounded. Fun to listen to, she can only become more so.