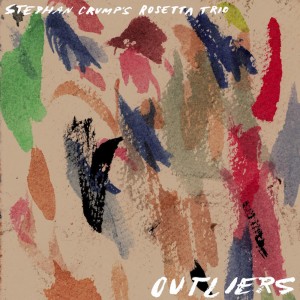 The fourth Rosetta Trio album comes six years after its last, 2013’s Thwirl, and nearly 15 years since bassist Stephan Crump first assembled the group. The trio’s minimal sonic palette—one acoustic guitar, one very clean electric guitar, one upright bass—forces the collected players to rely on technique and thoughtful interaction, rather than sonic effects. Acoustic guitarist Liberty Ellman is in the left speaker, electric guitarist Jamie Fox is in the right, and Crump is in between, a supportive mediator. The bandleader writes all but one piece, and his compositions have a moonlit, eyes-half-closed quality. The first track, “In Waves,” has a tumbling momentum reminiscent of early-’70s folk-rock as the forcefully strummed guitars march side-by-side with the deep, booming bass taking up equal space in the mix. By contrast, the title track is a staccato eruption of bent notes that might remind some of Mary Halvorson’s work. Crump is singing along with his bass, but it’s subtle, more like slightly melodic breathing.

The only piece composed by another group member, Ellman’s “Cryoseism,” has a shimmering quality, with both guitarists releasing quick, pinging lines that nod to West African music and the percussive, tapping explorations of Beninese guitarist Lionel Loueke. The album ends with the fast, bouncing “Esquima Dream” and returns to the ’70s soft-rock feel—almost reminiscent of a song from the band America—before the fleet unison melodies start to unspool.

Rosetta Trio sounds like nothing else any of its members do, and for that reason alone, it’s great to have them back.