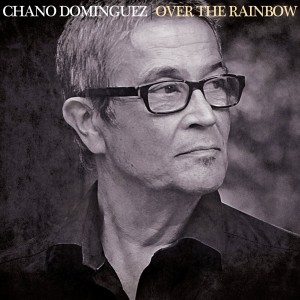 I have often confessed in these reviews to having a soft spot for solo recordings. I find performances in which the music is stripped down to just the artist and the instrument to be the most personal expression of that artist’s true musical self. On Over The Rainbow, the great Chano Dominguez plays 10 songs that are near and dear to the Spanish pianist’s heart. I have truly enjoyed his music over the years, but this recording is a special treat. As one of the godfathers of fusing Spanish folkloric music with jazz, Dominguez has a rich point of view. The set begins with a gripping take on the John Lewis composition “Django,” written, of course, in memory of the great Django Reinhardt. On “Gracias A La Vida” (Thanks To Life), Dominguez digs deep into the folk music of Chilean composer Violeta Parra. It’s a smoldering ballad performed with all the gusto Dominguez can muster from his left hand. He delivers the tune with the swagger of an artist in his prime, sometimes inserting Monk-like breaks, sometimes crafting beautiful, blues-tinged lines. Two of the strongest tunes in the set are Monk’s “Evidence” and “Monk’s Dream.” On “Evidence,” Dominguez captures the heart and soul of the master without losing his own innate lyrical ability. “Monk’s Dream” gives Dominguez an opportunity to show off both his stride chops and his incredible rhythmic sense. The set concludes with “Over The Rainbow.” It’s a sentimental, pure and personal rendition of one of most played tunes in the Great American Songbook. Not many can bring something new to this song, but not many can play the piano like Chano Dominguez. The beauty of the title track, as well as the entire album, will make you sigh, make you smile and make you thankful that Mr. Dominguez gave us this glimpse into his soul.