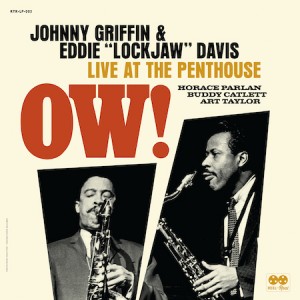 Back in the early ’60s, when tenor saxophonists Johnny Griffin and Eddie “Lockjaw” Davis teamed up to record a series of albums, they were dubbed the “Tough Tenors,” no doubt in appreciation of the rough-and-tumble nature of their dueling solos. But when I first heard them, courtesy of a Prestige “two-for” package released a decade later, what struck me about their blues-inflected interplay wasn’t its combative quality but, rather, its soul. To my ears, they had more in common with Sam and Dave than with Foreman and Ali.

That’s definitely the vibe on Ow! Live At The Penthouse, recorded over two nights at Seattle’s Penthouse club in 1962. Instead of playing to the pugilistic side of their sound, the program has the relaxed, congenial feel of friendly conversation, as if each solo is meant less as one-upmanship than as point/counterpoint.

Not that there’s anything lax about their playing. Indeed, “Tickle Toe,” the Basie chestnut that was one of the highlights of the 1960 LP Tough Tenors, is even tougher here, as they rip through the tune at a slightly higher tempo and a decidedly more elevated level of post-bop improvisation. Were the duo around today, their catalog likely would be peppered with references to the Fast and the Furious movie franchise.

That said, the most endearing thing about Ow! is the playfulness of the solos. Griffin’s feature on “Bahia,” for example, starts off by echoing some of the gruff bluesiness of Davis’ opening solo, but eventually, playing off Horace Parlan’s piano chords, the saxophonist quotes “Manteca,” and then finishes the tune with a lengthy lift from Ravel’s “Bolero.”

While Davis’ solos are long on drive and bluesy growl, Griffin’s more boppish sensibility is leavened by his fondness for quotes. He slips a few bars of Thelonious Monk’s “Rhythm-A-Ning” into the soulful “Ow!,” nods to “Fascinatin’ Rhythm” while trading fours with Davis during “Blue Lou,” and ends his solo on “Second Balcony Jump” with a snippet of Mendelssohn’s “Wedding March.” Like everything else on this album, it’s a blast.