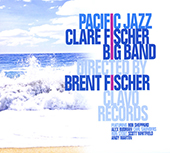 Brent Fischer, son of the legendary composer-arranger-bandleader Clare Fischer (1928–2012), carries on his father’s work of composing and orchestrating big band charts that please the eardrums and stimulate the brainwaves. Pacific Jazz is a multi-generational affair, featuring writing and playing from both Fischers as well as previously unheard repertoire that spans seven decades. Brent Fischer not only directs his late father’s big band performing his father’s material—he also contributes tunes and arrangements of his own, not to mention playing bass, mallet instruments and auxiliary keyboard parts. Clare Fischer, who was able to hear and participate in much of the music on this album prior to his passing, contributes keyboard and piano parts to three tracks, including an introspective solo performance of Gershwin’s “I Loves You, Porgy.” Frequently calling for unconventional instrumentation, the arrangements on Pacific Jazzare deceptively sophisticated, executed with style and skill by an ace ensemble that includes saxophonists Bob Sheppard and Alex Budman, trumpeters Carl Saunders and Ron Stout, and trombonists Scott Whitfield and Andy Martin, among many others. The presence of bass saxophone, contrabass saxophone, bass clarinet, contrabass clarinet and contrabass trombone is felt as much as heard on various tracks, inhabiting a world of low end where most traditional big bands dare not tread. On the high end, the orchestra is filled out with clarinet, flute, oboe, piccolo, soprano saxophone and sopranino saxophone parts, contributing timbres and textures usually reserved for chamber music. Clare and Brent Fischer’s thoughtful and playful arrangements are quite advanced, full of motifs that move through the music like modular mini-themes. The music here is interpreted with a high level of dynamic sensitivity and played with tremendous precision, resulting in a powerful collection that’s bound to appeal to fans of modern orchestrated jazz, or anyone who holds an appreciation for Clare Fischer’s enduring legacy.