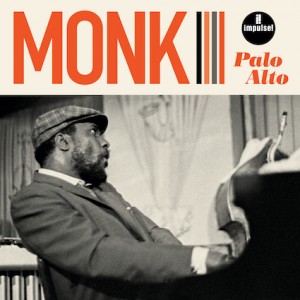 Thanks to an anonymous custodian with a tape recorder, today we have Palo Alto, the live recording of an unscheduled, off-tour concert that Thelonious Monk and his road band played in the fall of 1968. The concert’s backstory unspools like a modern feel-good movie: The jazz titan agreed to play a high school auditorium at the behest of eager student and future concert promoter Danny Scher, who, for one afternoon, managed to unite the racially divided California communities of Palo Alto and East Palo Alto through music. Monk’s playing that day was transcendent, and, more than 50 years on, it still conjures feelings of goodwill.

The complete set, six tunes from Monk’s regular touring repertoire, lasted for only a little over three-quarters of an hour. But during these few tunes, Monk and his quartet—longtime sidemen Charlie Rouse (tenor saxophone), Larry Gales (bass) and Ben Riley (drums)—exhibited the composer’s artistry at its most essential: bold, iconoclastic and warmly inviting.

The ensemble opened with “Ruby, My Dear,” Monk’s standard-form ballad and a ready platform for his chunky comping and quirky soloing. While an earnest Rouse expounded on the cheery head, Monk experimented with luscious chordal voicings underneath, only to step away from the tonal center during his own solo—haphazardly, rather than strategically. Or so it seems, at first listen.

As the set progressed, Monk introduced more innovation to his performance, and, increasingly, the band began to take greater liberties in their solos. For “Well, You Needn’t,” the album’s second track, Rouse spun Monk’s jangly, tongue-in-cheek melody off into multiple directions; Riley generated the galloping tempo, sustaining it through a multitextured solo; Gales bowed the bass while tossing off a vocalese; and Monk alternately picked on the harmony, sped through some scales or dropped out completely.

By the time the band hit two of Monk’s live mainstays—“Blue Monk,” the longest track on the album, and “Epistrophy,” an eleventh-hour triumph—their improvisations had reached an apogee of creativity and intensity. Relentlessly repeated blues choruses, breathless shifts in dynamics, irregular percussive accents, solidly swinging straightahead bits, weirdly out phrases—these two tracks contain some of the best soloing on the record.

Monk played alone on two pop tunes that day in Palo Alto: “Don’t Blame Me” and “I Love You (Sweetheart Of All My Dreams).” He had recorded these for Criss-Cross and Monk, respectively, during his early-’60s honeymoon with Columbia. On the versions here, the pianist dug deep into their pop idioms, only to upend each with clever reharmonizations—not a contradiction so much as a road map to deeper musical understanding.