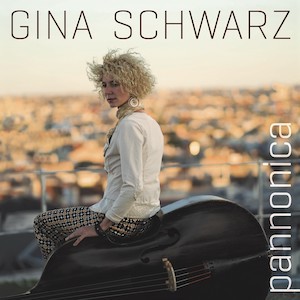 Austrian bassist Gina Schwarz leaves no room for doubt as to who occupies the driver’s seat on Pannonica. A few measures into the opening number, “GM’s Musicbox,” Schwarz’s muscular bass melody is high in the mix, doubled by Lisa Hofmaninger’s bass clarinet, setting the tone for the rest of this two-disc affair.

The ensemble she’s gathered for Pannonica is a versatile nonet that traverses rock, folk, swing, chamber jazz and free-improvisation—although the group’s not convincing in each format. The strongest moments come during open improvisations, many as short episodes highlighted as “Cut” on the second disc. The band swings hard, too, during the handful of moments that call for it—such as “Abibliophobia” and “Four Steps.” The rhythm section tends to struggle, though, summoning the intensity needed to sustain a convincing rock feel. Good horn writing and outstanding solo work, such as trombonist Alois Eberl’s turn on “Toronto,” redeem some of these challenges. Schwarz’s compositions are thoughtful and clever, making good use of stylistic range by highlighting the timbral strengths of different sections of the ensemble—tightly orchestrated contrasts between quietly energetic string passages and Primus Sitter’s raucous distorted guitar, for instance. Taking its inspiration from revered bebop patron Pannonica de Koenigswarter, Pannonica shows Schwarz demonstrating another way for a woman to support the music: by leading it themselves.