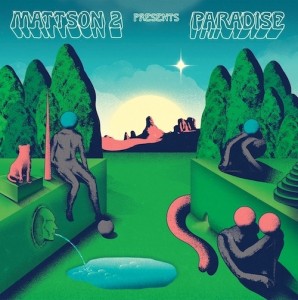 While psychedelia tends to portend an instrumental arsenal far different from that of a straightahead jazz band, one could argue that the styles share an appreciation for the free-flowing and abstract. And it’s those two overlapping qualities that Mattson 2 integrates on psych-jazz offering Paradise.

Jonathan and Jared Mattson-—the California-based identical twins behind the group—seemingly aimed for a bolder musical aesthetic than in the past, adding in lyrics and a newfound level of musical playfulness. Opening track “Naima’s Dream” starts with a serenade of lightly swinging rhythms beneath seesawing notes summoned by gently bent guitar strings.

Sounds like Jared’s octave-harmonizing guitar parts on the title track and the duo’s vocals on songs like “Shell Beach” and “Seacliff” might usher in anticipation of compositional spontaneity. That premonition only serves to further enhance Paradise’s calm atmosphere, allowing listeners to bask in uncertainty. And even when tonal contrasts—like the reverse-phased guitar, soft-edged bass and delicate cymbal work on “Darkness Surrender”—create singular textures, none of it ever demands so much attention that the album’s easygoing mood gets sullied.