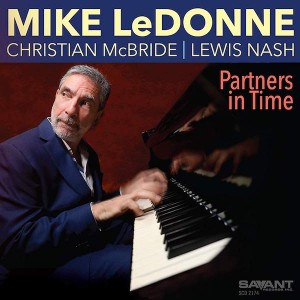 If you’re fortunate enough to have bassist Christian McBride—one of the top bandleaders in jazz—play on your piano trio album, it would be foolish to give him tight strictures. On the studio album Partners In Time, keyboard wizard Mike LeDonne wisely lets McBride do his thing, and recruits another elite player, drummer Lewis Nash, for a sterling session that showcases a simpatico rapport among three titans. The results are slightly loose, yet focused and authoritative. These musicians had collaborated before, but they had never made a trio album together.

LeDonne—who is revered in New York for his organ work in the Groover Quartet—sparkles in this setting, delivering red-hot piano lines that match the fiery intensity of his work on the Hammond B-3.

A thread of “standing on the shoulders of giants” runs through the program, thanks to various forms of tribute. McBride’s bass solos spark five of the eight songs, including “Lined With A Groove,” composed by one of his heroes: bass icon Ray Brown (1926–2002). LeDonne’s tune “Saud” (one of his three original compositions here) offers moods that shift from majestic to muscular, both appropriate for a song written to honor pianist McCoy Tyner (aka Sulaimon Saud).

LeDonne pays tribute to another one of his chief influences, Cedar Walton (1934–2013), with a swinging version of the pianist’s “N.P.S.” A shadow of history is present here: Walton included “N.P.S.” on his 2001 album, The Promise Land. That disc was recorded at Van Gelder Studio in Englewood Cliffs, New Jersey, which is where LeDonne recorded Partners In Time. In the album’s liner notes, the bandleader states that one of the reasons he wanted to do a session there was the opportunity to play the Steinway B piano that had been used on so many great albums.

The program concludes with the burner “Bopsolete,” which LeDonne gave an intentionally ironic title. The tune is spiced with some deliciously frenetic arco work from McBride. Though there are multitudes of potent riffs, breaks and solos in this program of mainly first-take recordings, Partners In Time is more than merely a blowing session. With creative interpretations of standards, such as a sly reading of “My Funny Valentine,” LeDonne, McBride and Nash illustrate that in 2019, bop and its related dialects are far from obsolete.

LeDonne, on organ, will lead the Groover Quartet during shows at Smoke in New York on Sept. 10, 17 and 24.