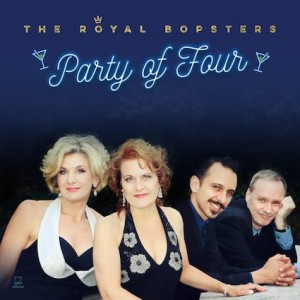 No jazz vocal group in the 20th century cast a longer shadow than Lambert, Hendricks & Ross. But all their qualities are echoed in the work of The Royal Bopsters. The group’s first album in 2015 included guest appearances by all-time jazz vocal greats and conveyed the sense of a torch being passed. Now, the Bopsters are back, and their sophomore release is an entertaining gem.

Party Of Four is a touchstone for jazz arrangers and vocalists, with bass Dylan Pramuk and tenor Pete McGuinness steering the artful arrangements, while soprano Amy London, alto Holli Ross and Pramuk contribute clever lyrics. The album is dedicated to the memory of bandmate Ross, whose life was cut short in May after a three-year battle with cancer.

Among several extraordinary tracks here, Pramuk’s arrangement of Tadd Dameron’s “On A Misty Night” is a standout. Ross’ version of Tito Puente’s hit “Cuando Te Vea” is another highlight, featuring guest bassist Christian McBride’s compelling tumbao and an uncanny mouth-trombone solo by McGuiness. But they don’t overshadow Ross’ impassioned vocal, a fitting valediction for a terrific singer gone too soon.

Party Of Four: But Not For Me; On A Misty Night/Gipsy; How I Love You (Let Me Count The Reasons); Lucky To Be Me; Why’d You Do Me The Way You Did?; Day Dream; Cuando Te Vea; Baby, You Should Know It; Our Spring Song; Rusty Dusty Blues; Infant Eyes; My Shining Hour. (58:42)
Personnel: Amy London, Holli Ross, Pete McGuinness, Dylan Pramuk, Sheila Jordan (4), Bob Dorough (8), vocals; Steve Schmidt, piano; Cameron Brown, Christian McBride (2, 7), bass; Steve Williams, drums; Steven Kroon, percussion (7, 11).