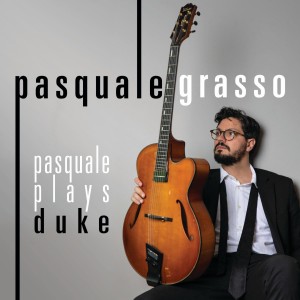 Italian-born guitar virtuoso Pasquale Grasso continues a winning streak with this classy take on the music of Duke Ellington — joining the ranks of such archtop devotees as Joe Pass, Kenny Burrell and John Pizzarelli, each of whom has recorded notable tributes to the iconic big band composer. Consisting of five solo guitar performances, six trio tracks and two compelling vocal features, Pasquale Plays Duke is the second of three albums Grasso is putting out on Sony Music Masterworks this year and next. An expertly produced project, it measures up to the high standards the master guitarist set for himself on a spate of recent recordings he has dedicated to the repertoires of Thelonious Monk, Charlie Parker, Bud Powell and Billie Holiday. It’s also a bit of an eye-opener for anyone not yet familiar with the esteemed guitarist and his quickly expanding discography. Grasso is a brilliant jazz improviser whose elegant melodic lines and speed-demon runs reveal the ever-present influence of historic jazz pianist Art Tatum. When he’s not dazzling listeners with technical feats and creative spark, Grasso enraptures them with oceans of smooth harmonic motion and all-enveloping sonic auras. Like a one-man big band, he keeps Ellington’s familiar melodies afloat on rivers of counter lines, inner voices and bass movement that virtually pour out of his instrument. A more conversational vibe emerges on tracks featuring Grasso’s working trio with bassist Ari Roland and drummer Keith Balla, two spirited, simpatico players whose tasteful contributions keep things swinging and popping. The album’s two vocal tracks — one featuring the youthful Samara Joy (“Solitude”) and another by the nonagenarian Sheila Jordan (“Mood Indigo”) — further elevate the program by bringing to the surface some of the complex emotions that dwell deep in the heart of Ellington’s (and Billy Strayhorn’s) music. An active presence on New York’s jazz scene, Grasso can be heard in various settings both in and around the Big Apple and out on the road. Upcoming performance dates include trio gigs backing Joy at the Exit Zero Jazz Festival in Cape May, New Jersey, on Oct. 1; Dizzy’s Club Coca-Cola in New York on Oct. 17; and Walton Center in Fayetteville, Arkansas, on Dec. 10. He will also accompany Joy on a nine-gig European tour that begins Oct. 30 at the Flame Festival in Turku, Finland, and concludes Nov. 12 at Duc des Lombards in Nice, France. Grasso will play his standing duo gig with bassist Ari Roland at New York’s Mezzrow on Oct. 4, 11, 18 and 25, and Nov. 15, 22 and 29. And, he will take part in an Oct. 5–10 run of shows with singer/actress Laura Benanti at Feinstein’s/54 Below in New York.