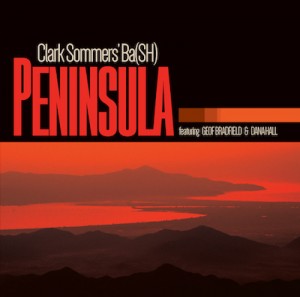 A bassist equally comfortable backing up vocalist Kurt Elling as he is occasionally performing alongside some of Chicago’s avant crowd and helming his groovier ensemble Lens, Clark Sommers coats post-bop with a veneer of 21st-century exceptionalism and adventure on Peninsula.

Recorded in 2017, four years after Ba(SH)’s first album was issued, the trio continues extolling the virtues of small groups, with Geof Bradfield’s tenor saxophone serving as the band’s propulsive lead, and drummer Dana Hall veering between swing and tracing the beat just beyond the lines.

The strongest tunes here are bookends for a few less-rewarding songs in the middle of the program; Bradfield’s a bit less convincing on soprano, leaving too much space for the trio to navigate. “Hope Dance,” though, benefits from the saxophonist’s dexterous and incandescent blowing, inspiring Sommers to go in on a solo that’s both more gratifying and melodic than other bassists might be able to summon.

While Peninsula serves to document a band two decades (and unfortunately only two albums) into its performing life, the recording also makes a point about Chicago and the players who call the city home. No matter how talented and well-credentialed Sommers, Bradfield and Hall are, they’re not necessarily the most visible players on the city’s scene. That’s how deep it is.