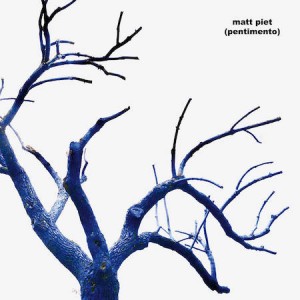 Chicago pianist Matt Piet set himself a tough challenge to overcome a creative block and “mental collapse,” resulting from accumulated problems—but triggered directly in 2018 by the death of his hero, Cecil Taylor. Borrowing a structural strategy from Bill Evans’ innovative 1963 album Conversations With Myself, Piet spent a day overdubbing improvisation upon improvisation to create keyboard works no single player—or even three together—ever could accomplish.

Sixty years ago, Evans recorded mostly familiar songs, but Piet used only conceptual prompts, such as “open fifths,” “inside the piano” and “within one octave” as the basis for each of the 15 constructs on (pentimento). He completed each piece stacking three sequential passes without relistening to the already inscribed tracks, relying on memory for what he’d just done and instinct for immediate reactions.

There’s no post-improv editing. These are discrete and varied sonic events, rather than developed or connected themes, and Piet’s music here (he’s led or been featured on some two dozen albums since 2014) is more often gestural, adventurous and exploratory than self-reflective or notably systematic. But it’s his imaginative range that’s beguiling. “To Elijah” is almost conventionally beautiful and “Plod On As One” is church-like, yet other tunes are eerie under-the-lid forays, reorienting the piano as a harp, windchimes, finger-cymbals or balafon.

Spontaneity is this album’s watchword and self-involvement its discipline, yet some of these improvisations have moments that could be distilled, their implications hinting at works to come.