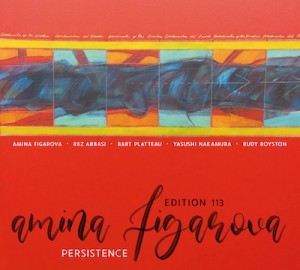 Genre-splicing fusion is a tricky thing to get right. Strike the wrong balance between structure and sound, and you can end up with a pastiche that does a disservice to each component part. For pianist Amina Figarova, it’s a risky move to produce an electronic-inflected, part hip-hop and funk-jazz fusion album after 20 years leading an acoustic ensemble.

Aptly titled, Persistence is a surprising delight and one that seemingly avoids many of the pitfalls of fusion. The opening title track launches into enthralling rhythmic interplay between drummer Rudy Royston and bassist Yasushi Nakamura, while flutist Bart Platteau channels the spirit of the Headhunters in his soaring melodies. Figarova, meanwhile, artfully comps, switching between piano and synthesizer. The record continues in this breathless vein, riffing off of Robert Glasper’s hip-hop mentality for “I’ve Got No Time,” while “R Song” highlights Platteau and Figarova’s almost telepathic interweaving with guitarist Rez Abbasi.

Even on slower numbers—“Morning Blue” and “Horizons”—Figarova and her band manage to create a convincing sonic collage of acoustic and electric sounds: jazz swing and hip-hop swag, and a rollicking funk bottom end. Figarova does trip up on the somewhat gratuitous inclusion of rapper JSWISS for “I’ve Got No Time.” But Paul Jost’s open vocalizations, mirroring Platteau’s melody on “Horizons,” are genius.

Ultimately, Persistence stands as a worthy template for a wholly open approach to jazz that’s generous enough for the inclusion of myriad influences.