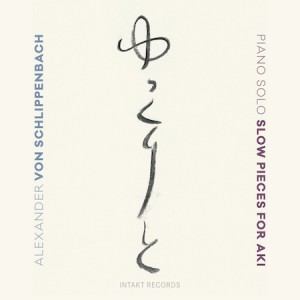 Alexander von Schlippenbach might have been able to record Piano Solo: Slow Pieces For Aki at an earlier time in his career, but it seems particularly suited to this moment in his life. He was 81 years old when he recorded this set of solo performances late in 2019.

His earliest recordings with the Globe Unity Orchestra in the ’60s and ’70s were neither slow nor solitary, and his oft-incendiary namesake trio has represented the acme of European free-jazz for decades. Somewhere along the line, pianist Aki Takase, von Schlippenbach’s spouse, asked him whether it had to be that way. This album is the answer. Like his other 21st century solo-piano recordings, it puts aside expressionism and overt displays of technique, favoring a reflective nature. On “Cleo” and “Haru No Yuki (Frühling Im Schnee),” 19th-century classical music looms large; “Torso” sounds like an exploded diagram of Thelonious Monk’s “Misterioso.” But there aren’t really sonic shocks or overwhelming waves of energy on Slow Pieces For Aki. Instead, the album represents the essential components of von Schlippenbach’s music, its construction and connections laid bare in an act of musical self-analysis.