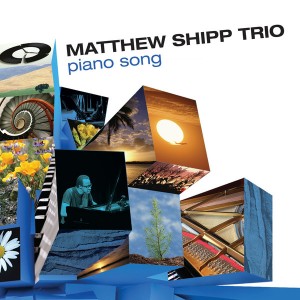 Piano Song has been touted as the final album pianist Matthew Shipp will release on Thirsty Ear, the New York label that’s steadily issued many of his recordings over the last 18 years—a span during which he curated the imprint’s adventurous improvised music endeavor, the Blue Series. He will continue to oversee the series going forward, but will take his own music elsewhere, so this feels like little more than an administrative shuffle.

Still, Piano Song has a valedictorian excellence—a perfect way to depart—that represents a new peak in Shipp’s lengthy career. He’s joined again by Michael Bisio, his regular bassist since 2011, with drummer Newman Taylor Baker stepping in to complete the group, lending a groove-oriented thrust on certain tracks that was absent during drummer Whit Dickey’s stint in the lineup.

On a marvel like “Cosmopolitan,” the pianist dances around a jagged but graceful theme like one of the artful boxers he so famously admires, bobbing-and-weaving, jabbing and inserting tart feints.

The trio hits upon a new tactic on “Blue Desert,” a minimalist exploration rooted around Baker’s imperturbable maraca pulse, while the drummer also powers “Flying Carpet” with a seductive groove that forms an exquisite tension with Shipp’s shattered-glass phrasing.

This album might be saying goodbye to a particular partnership, but musically, it feels like an exciting new beginning for one the most pre-eminent pianists of the last three decades.