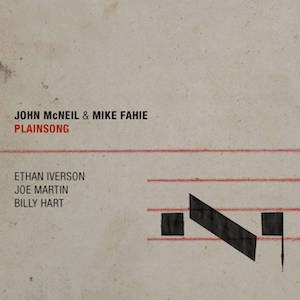 Trumpeter John McNeil and trombonist Mike Fahie have crafted an outstanding program that alternates between seeking and soaring on their collaborative album Plainsong, consisting of 11 original compositions and a version of Thelonious Monk’s “Green Chimneys.” The co-leaders recruited a stellar band for this album: pianist Ethan Iverson (who rose to fame in The Bad Plus), bassist Joe Martin (who has collaborated with Chris Potter, Anat Cohen and Mark Turner) and drum legend Billy Hart, whose resume includes stints with Wes Montgomery, Herbie Hancock and Stan Getz. In recent years, Hart has led a quartet that features Iverson, so those two musicians share a close rapport that probably helped create a simpatico atmosphere for the Plainsong sessions. The centerpiece of the album—Fahie’s 12-minute “Plain Song, Rain Song”—begins with what might be the sound of Iverson strumming the piano’s strings. The musicians establish a mood that’s mystical and mysterious, as the song reveals its essence like a flower slowly blossoming. On this tune, the fact that McNeil makes such great use of his time in the spotlight demonstrates how well he and Fahie know one another’s strengths. Each member of this band is an artist one might call a “musician’s musician”—a player far more devoted to chasing the muse than to chasing fame. Two of the song titles here nod to fellow musicians: Iverson’s “The Tristano Chord,” which could be a tip of the hat to pianist and DownBeat Hall of Fame inductee Lennie Tristano (1919–’78), and McNeil’s “Abercrombie,” which was composed and recorded when the great guitarist John Abercrombie (1944–2017) was still with us. The quintet’s version of “Green Chimneys” opens with hooky brass riffs from McNeil and Fahie before moving into the type of challenging yet rewarding terrain that Monk scholars enjoy. This 75-minute disc is richly detailed with inspired twists.