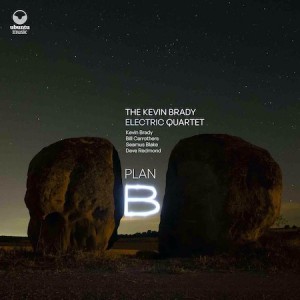 Kevin Brady is a well-regarded drummer from Ireland. Bassist Dave Redmond is a countryman, while keyboardist Bill Carrothers and saxophonist Seamus Blake are both Americans. When they come together, they create a collective sound that is classicist, yet adventurous enough to insist on its own modernity.

The opening “Airbourne” sets the tone nicely; this is not “organ jazz” in the soulful, hard-grooving sense, but traditional hard bop with a little bit of extra funk in the drums and some early ’70s fusion emanating from the Fender Rhodes. Brady’s playing has an organic looseness and room sound that nods to classic ’70s production, while Carrothers’ shimmering keyboard brings to mind Return To Forever before it went full prog rock, with some Larry Young-ish psychedelia here and there. Redmond’s bass is far from superfluous; in fact, his deep, almost dubby lines allow the Fender Rhodes to float like a cloud or deliver stinging solos without having to worry about providing any kind of anchor. And Blake never treats the other three as his backing band; even when he’s soloing, he’s listening. The ironically titled “Short ’n‘ Sweet” (it comes within 10 seconds of being the longest piece on the album) is a fast, almost danceable groove-a-thon that gives every player space to either solo or make an emphatic, but still supportive, statement. While “Suicide Squeeze” is a fascinating blend of bebop fluidity with ’70s soul-jazz. Blake’s long, limber excursions place his impressive technique in service of Grover Washington Jr.-esque melodic hooks.