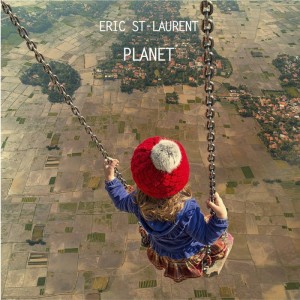 Toronto-based guitarist St.-Laurent blurs lead and rhythm roles on his seventh album. He salts an occasionally vexing work of sonic originality with a Latinate cover of Charlie Parker’s “Donna Lee,” an aggressive take on Carly Rae Jepsen’s “Call Me Maybe” (St.-Laurent’s solo is particularly angular and pointed) and a reverent version of the theme from the second movement of Beethoven’s eighth piano sonata.

Aside from the Beethoven and St.-Laurent’s rueful, liquid “Polarize,” the tunes are up-tempo and busy. And while the production of this empathetic group is detailed and hot, it’s above all clear, giving pianist Attila Fias, bassist Jordan O’Connor and percussionist Michel DeQuevedo just the weight suitable for St.-Laurent’s largely exciting weave.

The Montreal native pays homage to a similarly deft musician on the buoyant “What Would Steve Gadd Do?” He also casts a witty eye toward magic on the bouncy “Spoon Benders” (the guitar-piano twine is strikingly resonant) and builds a sturdy foundation with bassist O’Connor on “The Bass And The Mama,” the sparkling tune that launches the disc.

The album is generally dramatic, suggesting this quartet would be a pleasure in performance. Each player effortlessly passes the melody around, no one showboats thanks to efficient and impressive solos, and the band’s common rhythms speak to a continental sensibility. There are hints of high-life stylings. The delightful title track suggests a merger of shuffle and tarantella, and the Parker transformation beds St.-Laurent’s sharp, single-note forays in Afro-Cuban rhythms.

The key caveat on this album is that even though the insides of the compositions vary, the forefront too often feels like clatter. Individually, the tunes work, but they don’t accrete into a totally satisfying whole. Kudos to St.-Laurent for devoting track nine to album credits, bringing down the curtain on a largely laudable and daring effort. DB