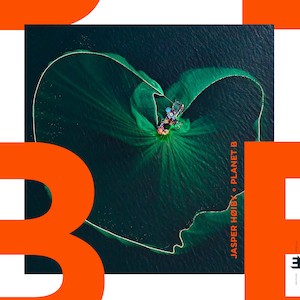 In these unusual times, Danish bassist Jasper Høiby’s Planet B feels timely and surreal. The first installment of a four-album project about humanity, climate change, artificial intelligence and monetary reform, Planet B examines the vices and tensions of today’s reality, and imagines a more inclusive, connected world.

Høiby’s high-octane compositions lay the groundwork for introspective dialogue with saxophonist Josh Arcoleo and drummer Marc Michel, as they respond to thought-provoking words from philosophers and activists like Ram Dass and Grace Lee Boggs.

“Story Of Self” sets the tone with dark, cinematic strings backing a voice sample from Charles Eisenstein, who declares that the idea of seeking control over “whimsical arbitrary forces of nature” no longer resonates, and that we must “step into a new story of self and a new story of the people.” Samples of Boggs and civil rights leader Rep. John Lewis galvanize the trio in breaking down social constructs that no longer serve us. Arcoleo’s blustery horns in “Consciousness” give way to a simmering discourse of deliberate bass lines and melodic percussion. Michel oscillates between introspection and forceful rhythms on “Interconnectedness” and “Never Forgotten,” while Arcoleo and Høiby construct methodical bebop soundscapes. On “Life Is A Gift,” the trio begins to home in on themes of collective power and gratitude to envision a better world, Arcoleo’s horns dynamic against Michel’s vigorous drums and Høiby’s reflective bass lines. Planet B has provoked vital conversations that should leave listeners awaiting the rejoinder, and luckily, there are three more installments to come.