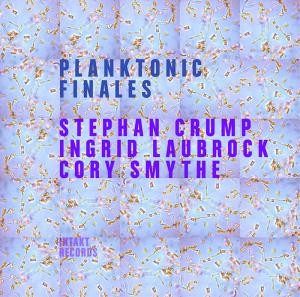 This album grew from a friendship. It began when German-born saxophonist Ingrid Laubrock invited bassist Stephan Crump and pianist Cory Smythe—both stalwarts of New York’s creative music and contemporary classical scenes—to her Brooklyn apartment in 2015 for an informal jam. According to the participants, the chemistry was immediate: “It worked right from the first note,” Crump recalls in the liner notes. The trio reconvened at a recording studio in Yonkers, New York, later that year to capture the magic, and Planktonic Finales, the group’s debut, is the fruit of those bountiful recording sessions. As one might expect from a trio of such talented improvisers, the composite sound is one of discovery and process, of organic structures being assembled without a blueprint or fixed template. The sonic density is therefore highly variable, with alternating moments of extreme fragility and near-impenetrable mass. Occasionally, those textural variations occur within close proximity on the same track. That’s certainly the case with “Sinew Modulations,” the album’s longest piece, which swaps fragments of crackling intensity with swathes of pillowy sensitivity. Formal structures emerge from within the acoustic shape-shifting, often in fresh and surprising ways. A thundering piano statement erupts from the woody bass rumblings of “Through The Forest,” and spare, ghostly soprano saxophone notes drift through the mist of “Submerged (Personal) Effects,” generating the feeling of both inevitability and surprise. If camaraderie is at the heart of free improvisation—fostering deep listening and uninhibited communication—then the trio of Crump, Laubrock and Smythe seem to have synchronized around the same pulse.