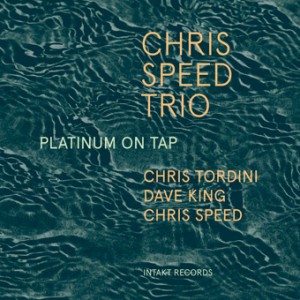 The Chris Speed Trio’s new album, Platinum On Tap—the excellent follow-up to its 2014 debut, Really OK (Skirl)—continues its artistic journey of making new music that draws upon jazz history. Saxophonist Speed, drummer Dave King and bassist Chris Tordini have crafted a cohesive program of originals and two covers that nods to the music of past decades without simply rehashing the art that inspired these savvy players. The music here occupies a space outside of time, a testament to the trio’s unique ability to dig into a older style and pull out new sounds from it. This is true for the entire album, but it’s illustrated particularly well on the last three tunes—Hoagy Carmichael’s “Stardust,” Speed’s original “Torking” and Albert Ayler’s “Spirits.” On “Stardust,” the trio artfully reanimates a standard, on “Torking” Speed takes a classic tenor voice sound and juxtaposes it with something much more modern, and on “Spirits” the musicians dive into free-jazz territory. Speed’s playing on the opener, “Red Hook Nights,” is mellow, patient and lyrical, emphasizing—as the liner notes indicate—“the connection between the vocal and instrumental.” Platinum On Tap provides an intense glimpse into past but still looks forward.