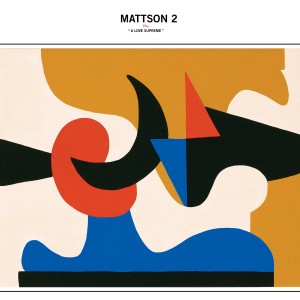 Even as his posthumous Both Directions At Once: The Lost Album takes John Coltrane higher on the Billboard charts than he’s ever been, there’s an argument to be made that his A Love Supreme is one of the most crucial jazz albums ever recorded. The disc was—and remains—a devotional edict, something that proclaims Trane’s adamance in finding a bit of peace on earth. And that’s maybe what’s made his landmark album endure—and be as frequently covered as it has been. The latest jazzers to undertake a reworking of the music are a set of Southern California twins: percussionist Jonathan Mattson and multi-instrumentalist Jared Mattson.

In various pressings, Coltrane’s recording has been diced up into three or four tracks. Mattson 2, though, offer five distinct cuts, with an interlude slipped into the playlist that comes off like psych-folk band Woods jamming impromptu. But “Acknowledgement” appropriately opens with that recognizable bass figure propping up the brothers’ groove. It’s at least a step away from transcendence, but wrenching this thing out of history is a tough task. The duo swings hard in places, “Pursuance” being a notable nu-fusion display. And if nothing else, Jared dubbing in guitars, bass and keys is a herculean task few would dare, especially on material with a past like this.

Mattson 2’s Play A Love Supreme likely won’t make anyone pitch their Coltrane vinyl. But it wasn’t supposed to. The compositions here lend the Mattsons a framework to get free, while acknowledging the remarkable feats of their forbearers.