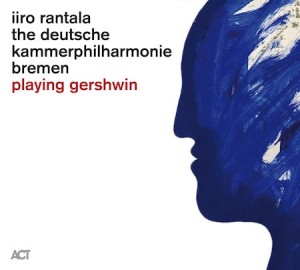 Jazz musicians who feature with symphony orchestras are obviously and massively outnumbered, yet they have a remarkable tendency to shape the agenda. It seems likely, though, that Finnish jazz pianist Iiro Rantala brought to The Deutsche Kammerphilharmonie Bremen a program of deference.

The title of Playing Gershwin is a misnomer; about half of its runtime is given to “Rhapsody In Blue” and a treatment of themes from Porgy And Bess. The former is an excellent showcase for Rantala’s playful approach to both his instrument and his own undeniable virtuosity. In an odd twist, however, the subtle liberties he takes—a trill here, some rubato there—show more improvisational initiative than anywhere else on the album. It’s violinist Antti Tikkanen who has pride of place on “Porgy And Bess Suite,” distinguishing himself with a bluesy turn on the “It Ain’t Necessarily So” section. The album’s back half is given over to five short Rantala originals. By and large, though, these might as well have been classical pieces; that’s the flavor with which he chooses to express them, adding the occasional faint tang of jazz. None of this is to say that Playing Gershwin is musically disappointing—unless, of course, listeners are expecting a jazz musician who drops George Gershwin’s name to actually play jazz.

Playing Gershwin: Rhapsody In Blue; Porgy And Bess Suite; What Goes Up, Must Come Down; A Concert Tango; Anyone With A Heart; Hard Score; Freedom. (64:18)
Personnel: Iiro Rantala, piano; The Deutsche Kammerphilharmonie Bremen.