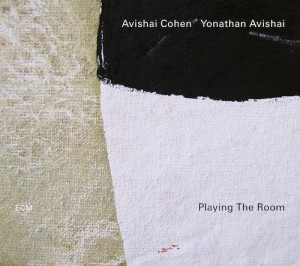 Friends and musical co-conspirators since middle school, trumpeter Avishai Cohen and pianist Yonathan Avishai document their nearly lifelong collaboration on Playing The Room. As the title implies, this duo record sometimes feels like a trio album—with the famously pristine, resonant studios in Lugano, Switzerland, playing the part of the group’s third member.

Each performer contributes one original—Cohen’s “The Opening” and Avishai’s “Two Lines”—to set the album’s tone. Both are wistfully modernistic, projecting a sense of the pair settling into the spacious studio atmosphere before launching into an introspective take on John Coltrane’s “Crescent.” The rest of the album delves into skillful interpretations of carefully selected classics by compositional masters: Ellington, Ibrahim, Wonder. By decentering themselves as composers, Cohen and Avishai highlight their brilliance as improvisers within the tradition. And while this album depicts a pair of Israelis in Switzerland, Playing The Room draws its strength from being steeped in the blues—whether in the playfully celebratory “Dee Dee” or the more directly soulful “Ralph’s New Blues.” This lively and tender exploration of the two musicians’ friendship shows how their skills have deepened together through a mutual dedication to the music.