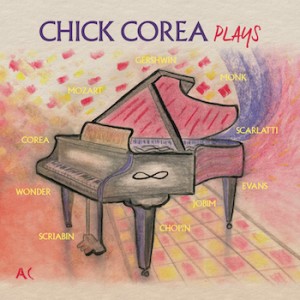 Whether he’s playing works by Thelonious Monk, Mozart, Stevie Wonder or simply improvising on the spot, Chick Corea says “it’s all right now” in the liner notes to this live, mostly solo album. That is, it’s about being in the moment, and alive with the music. But as the breadth of Plays suggests, Corea is democratizing the music, according show tunes and classical music the same treatment he offers bebop and pop.

Let’s start, as he does here, with Mozart’s adagio from the Piano Sonata In F. This isn’t Mitsuko Uchida’s Mozart; not only does Corea tack on an improvised intro, but he happily adds extra notes and a few invented phrases—and that’s modest compared to his take on Chopin’s Prelude Op. 28, #4, which stretches the 25 bars of the score into a four-minute romp, Corea riffing happily over the changes. To be fair, he takes even greater liberties with Bill Evans’ “Waltz For Debby,” and listening to him toy with that tune is one of the album’s greatest treats. Throughout, Corea’s way of paying tribute is to match his genius with that of other great composers, both playing and playing with what they’ve written. And there’s an equal amount of sparkle on the second disc, where the main composer is Corea himself. In addition to spontaneous portraits and improvised duets with promising young players, he includes a wonderfully warm rendition of his “Children’s Songs,” a set of 12 sketches that deserve wider attention.