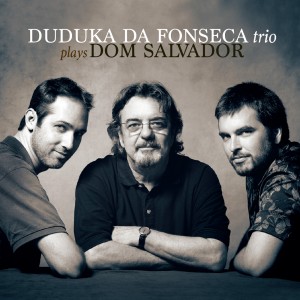 Outside of Brazilian jazz circles, the name Dom Salvador is unlikely to ring bells. But in the mid-1960s, he was at the forefront of a movement to bring a genuine jazz sensibility to the samba. Unlike contemporaneous bossa nova efforts, which dressed Brazilian rhythm in jazzy harmony, Salvador’s recordings—most notably Rio 65 Trio—pursued a more organic fusion, expanding possibilities in both directions.

Drummer Duduka Da Fonseca grew up on those recordings, memorizing them as a teen in Rio de Janeiro, and then cemented his connection to the music in New York, where he began working as Salvador’s drummer in 1980. In short, it would be hard to imagine a tribute with better bona fides than this.

What animates the album isn’t the obvious affection Da Fonseca feels for the music so much as the ongoing vitality of Salvador’s approach. Take, for example, “Farjuto.” The feel on the Rio 65 Trio version is playfully varied, as if Salvador and company can’t be constrained by a single groove. Da Fonesca’s trio, by contrast, opts for an everything-at-once tack, layering the rhythms so that the Da Fonseca’s Blakey-like accents always are flavored by the relentless swing of David Feldman’s piano, and vice versa. Same idea, different iteration. Feldman does an admirable job of fleshing out the harmony in Salvador’s writing without underplaying the rhythmic content, and his phrasing on “Mariá” and “Para Elis” leaves one wondering why those ballads aren’t better known. But it’s the polyrhythmic group interplay on “Gafieira” that make the strongest case for Da Fonseca’s adoration of Salvador, and the listener’s admiration for Da Fonseca.