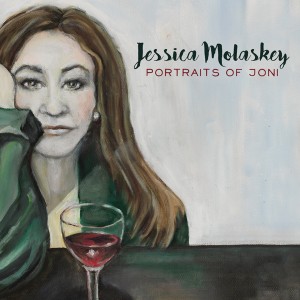 The singer-songwriter movement of the 1960s produced many artists whose work is still revered today, but literary fans have a particularly strong affection for three of those tunesmiths: Leonard Cohen, Bob Dylan and Joni Mitchell. Cohen, who died Nov. 7, is the subject of a new tribute album, Sincerely, L. Cohen, which features live performances by Richard Thompson, Lenny Kaye and more than a dozen other artists. Dylan, now a recipient of the Nobel Prize for Literature, is the subject of new tribute albums by singer Joan Osborne and guitarist Andreas Hourdakis. Mitchell, who released the box set Love Has Many Faces in 2014, has been the subject of numerous tributes, both onstage and in the recording studio. Vocalist Tierney Sutton received a Grammy nomination for her 2013 tribute, After Blue (BFM). Now comes Portraits Of Joni, a brilliant tribute from singer/actor Jessica Molaskey, who has expanded her fan base thanks to Radio Deluxe, the radio show she co-hosts with her husband, jazz guitarist John Pizzarelli. Molaskey’s tribute is a family affair, as it features contributions from John and the couple’s daughter, Madeleine. On the heartbreaking “Little Green,” Madeleine plays guitar and sings with her mother, shaping transcendent harmonies that are partially a product of shared DNA. This 14-track album—which includes some of Mitchell’s most famous compositions, such as “Help Me,” “A Case Of You” and “Big Yellow Taxi”—showcases Molaskey as a gifted interpreter with an impressive vocal range. It also demonstrates that she’s an intelligent curator who treats these songs not as museum pieces, but as stellar, malleable material that can be recast in artful ways. One track gracefully pairs “Dreamland” (from Mitchell’s album Don Juan’s Reckless Daughter) with “Carey” (from Mitchell’s Blue). Elsewhere, Mitchell’s “The Circle Game” is intertwined with the Jobim classic “Waters Of March.” In a similar but even more surprising move, “Chelsea Morning” is paired with Toninho Horta’s “Aquelas Coisas Todas.” (John Pizzarelli previously recorded both the Jobim and Horta compositions on his 2004 album, Bossa Nova.) On the most memorable track, Larry Goldings’ solo piano rendition of “All I Want” flows into a quintet reading of “Blue” that highlights Molaskey’s vocal power and theatrical chops. Molaskey’s ability to inhabit a character suits this project perfectly, as evidenced by her sly, humorous embodiment of the protagonist in “Raised On Robbery.” This album definitely rewards repeated spins. When the 56-minute program concludes, many listeners will immediately want to hear it again.