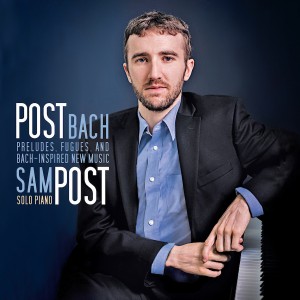 Sam Post is an exceptional classical and ragtime pianist, but on Post Bach, at least, he is not an improviser. The album title reflects the names of the two composers whose work he features on solo piano. Each of the five preludes and fugues here, contains some subtle-but-clever rhythmic recalibrations.

This is not Post rewriting Bach’s rhythms; he’s interpreting them as written, but with a syncopator’s touch. On the “C Major Prelude,” that means playing it double quick; for the “C Minor Fugue,” it means a choppy ride through a notoriously difficult piece. Post just gives a little extra ooph to the “D Major Prelude,” which already has a syncopated backbeat.

For jazz-loving ears it’s Post’s own compositions that have the goods. Tango Toccata” has the syncopations and cross-rhythms at the heart of Black American music. In “Efficiency Remix” and “Lighthouse” — the latter something like proto-boogie-woogie — the listener is immersed in Post’s rhythmic laboratory. He reverts to subtlety for his own prelude and fugue in C# minor (a tribute to his late music teacher); even so, once the rhythmic beast is unleashed, Post never quite puts it back away.