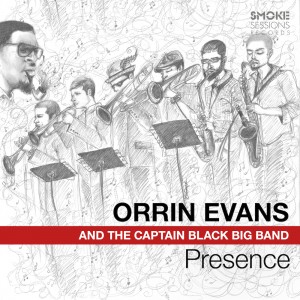 Back in the aughts, I’d take New York house-guests from out of town to hear the Mingus Big Band’s regular weekly gig. The ensemble’s sheer sonic force empowered timid jazz listeners, and its merit-based camaraderie gave visitors a sense of the city’s stand-out-to-fit-in culture.

Orrin Evans’ piano chair in that band was ideal training for his own Captain Black Big Band and its long-running residency at Smoke. On Presence, Captain Black returns to its first album’s live format, but with a smaller nine-piece group. Recorded in two Philly clubs, this is Evans in hometown party mode, offering a spirit of openness and ease to the musical family that gave it to him first. Still, Evans’ composing and playing here have the originality and outsider flash that make him a natural addition to The Bad Plus. As always, he’s happy to feature Captain Black’s other composers and arrangers, who craft some finely interwoven ensemble passages. Because they write for individuals as much as the group, this is a blowing session, too. Trombonist David Gibson’s “The Scythe” offers equally charismatic solos from himself, saxophonist Troy Roberts, trumpeter Josh Lawrence and Evans.

Roberts’ “Trams” begins with audience applause fading into a clap-a-long, which Anwar Marshall finesses into a second-line beat. “I forgot my tambourine, man!” someone yelled, and it’s unclear if it comes from the band or the audience. This music’s exuberance blurs boundaries like that: If you’re hearing it, you’re family.