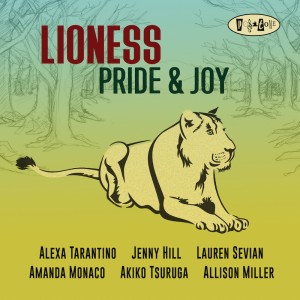 Patriarchy being the well-established evil it is, a band consisting solely of women, playing tunes solely by women, in hopes—at least according to its record label—of winning over female listeners newly interested in jazz, is no doubt a coordinated blow against the pernicious bias we’ve allowed to flourish as generations of talent stood in the shadows.

It’s taken far too long for women improvisers to enjoy the work opportunities their male counterparts have been granted through the past century. So, Lioness—a sextet built on a female-first concept for a woman-centric performance series in New York—is unique. Not groundbreaking, of course; we all can cite notable jazz outfits that operate sans men. But valuable, and to a degree, heroic.

But somewhere along the line, Lioness made a choice to keep its music so legible that it’s had a stifling effect on the mystique that’s often a key ingredient of potent improv and long-lasting art. Across this just-fine album of overtly swinging pieces is a kind of breezy facility that’s a little too eager to please.

The participants—tenor saxophonist Alexa Tarantino, alto saxophonist Jenny Hill, bari player Lauren Sevian, guitarist Amanda Monaco, organist Akiko Tsuruga and drummer Allison Miller—render the material with brio. Melba Liston’s “You Don’t Say” should be proud of its panache, and “Sunny Day Pal” has the vigor necessary for its Caribbean bounce. However, both tracks color so strictly within the lines that they tilt toward being pedestrian—the individual idiosyncrasies that often accrue into a band’s essence are watered down along the way. When they roll through “Think,” Aretha Franklin’s indictment of oppression, pith and politeness mute its bite.

The music improves when the arrangements improve. One of the album’s highlights is “Ida Lupino,” where Miller’s brushes spur on the musings of Tarantino and Monaco. Tsuruga ebbs and flows here, too, creating some gorgeous swells that splash through Carla Bley’s enigmatic theme. “Identity” also adds a needed air of intricacy to the mix, its victory bolstered by the impressive purr of Sevian’s horn, as well as the hazy blues mood the band consistently tweaks. Compared to the decorum of “Mad Time,” and the well-scrubbed “Jelly” and “Funky Girl,” these tracks seem almost subversive.

Pride & Joy is a heartfelt romp that has impulses to leave protocol behind, but doesn’t muster the liftoff needed to truly break free. It’s just as conventional as it is catchy, and for me it unearthed an old quandary: Is there a downside to a piece of art being merely entertaining, rather than deeply provocative?