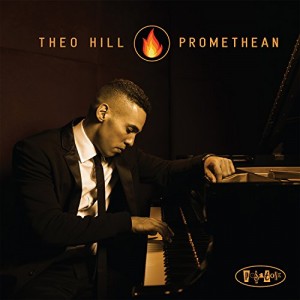 On the cover of Promethean, pianist Theo Hill’s debut album for Posi-Tone Records, is a quote from filmmaker Jean-Luc Godard: “It’s not where you take things from,” it reads, “it’s where you take them to.” In that spirit of transportation—and transformation—Hill presents a program of 11 songs in which his goal is to pay homage to the music of his idols while cultivating his own distinct voice. While the project benefits mightily from the presence of bassist Yasushi Nakamura and drummer Mark Whitfield Jr., it’s Hill’s formidable piano chops and probing arrangements that make this album such a winning statement. In his hands, the propulsive groove of Duke Pearson’s “Is That So” receives a contemporary makeover, with a funky sense of geometry that preserves the integrity of the original while pushing it into the 21st century. Chick Corea’s “Finger Painting” becomes a vast arena for quiet exploration, with deliberately spacious piano figures that allow room for the composer’s genius to breathe. Gems by Kenny Kirkland (“Blasphemy”), Bobby Timmons (“This Here”) and Hale Smith (“I Love Music”) populate this album as well, and Hill approaches them with an equal measure of reverence and revival. But it’s a pair of tunes by drummer Tony Williams— “Pee Wee” and “Citadel”—that best exemplify Hill’s astounding range as a stylist. The first is a delicate ballad, played with serene clarity and dignified restraint. Like the best poetry, it’s the spaces between phrases that connote the most meaning. The second is a blast of modern jazz energy—as passionate and powerful as Williams’ drumming. That Hill can cover so much stylistic territory is impressive—he even adds fiery original, “The Phoenix”—but even more impressive is the way he so confidently stakes out territory of his own. We are living in a Golden Age of piano players, and the sheer amount of young talent out there is encouraging. In this fertile soil, it’s inspiring to see that Hill has planted his flag.