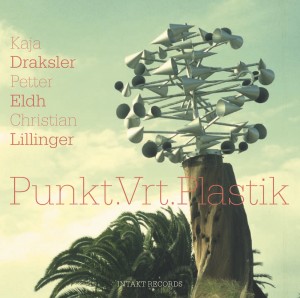 The lineup of any ensemble has an alchemical quality to it. The right combination of personalities and styles can yield nothing less than gold. But throw in one bad element and it quickly can turn leaden.

That was the risk drummer Christian Lillinger and bassist Petter Eldh took when they started working with pianist Kaja Draksler in a new trio. The pair already were familiar with one another, having provided the backbone for the marvelous free-jazz quartet Amok Amor. Draksler was the X-factor they brought into their creative partnership, a new source of heat that could bend their playing into new shapes. The resulting work is as invitingly, thrillingly jumbled and postmodern as their album’s title. The connection that Lillinger and Eldh have built up over the past decade is still clear and strong, but Draksler flows and spills around it like a steady stream of water, slickening up a craggy rock.

The best tracks here have the feel of a classic jazz album subjected to William S. Burroughs’ cut-up method or the whims of a particularly keyed-up remixer. “Punkt Torso” could be a ballad, but the otherwise fluid melodies and gentle splash of the drums sputter and break in this trio’s hands. It’s like watching a colorful, glitchy livestream. And it only makes those moments of clarity and accessibility—the slowly unfurling intro of “Body Decline,” Draksler’s pensive solo that begins “Life Is Transient” or when it sounds like Lillinger and Eldh are going to slip into a tight funk groove—carry you through the album’s more challenging moments. They’re like those moments at the first peak of a roller coaster ride, before you’re sent tumbling into a adrenalized thrill ride.