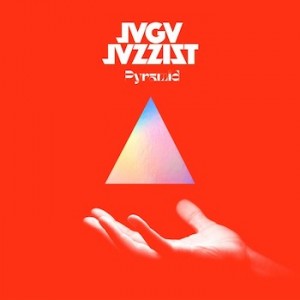 In the past, Norwegian ensemble Jaga Jazzist has come off as a 21st-century big band, a rock act with jazz inclinations and a group that prizes beat music as much as well-arranged choruses. It just depends on the record.

After a lengthy wait—the very electronic Starfire, Jaga Jazzist’s last proper release, came out back in 2015—Pyramid arrives as a cooled-out, surreally ambient exploration of texture. The disc retains a debt to jazz and draws on a range of influences that enable the eight-piece ensemble to land on new combinations of sound. The absence of trumpeter Mathias Eick—who left the group after its 2010 album One-Armed Bandit and went on to lead a handful of ECM dates—doesn’t really come to bear. But the noticeable lack of extended horn passages seems to account for the program’s reliance on synth.

Dedicated to electronic music pioneer Isao Tomita (1932–2016), album opener “Tomita” ventures through at least four distinct sections, shifting from serene electronics with Lars Horntveth’s saxophone gliding atop it all to rock-act rhythmic gambits. Bassist Even Ormestad’s round tones bounce off the quick-step drum pattern in the song’s middle portion, making it seem like the Nordic psych scene is something that the band has kept tabs on, too. The album—clocking in at about 40 minutes, despite being billed as an EP—next turns to “Spiral Era,” a tune that sounds grand and endless, but focused enough to hinge on Horntveth’s guitar work. “The Shrine” gets all elegiac, before slowly revealing its overtly electronic underpinnings; even with that conceit, the horn/synth choruses seem steeped in a big-band lineage. And like earlier tracks, as well as on the closing number, “Apex,” the compositional approach taken by Horntveth stitches together vastly different musics into a singular piece of art, perhaps pointing to why Flying Lotus issued the recording on his far-reaching Brainfeeder label.