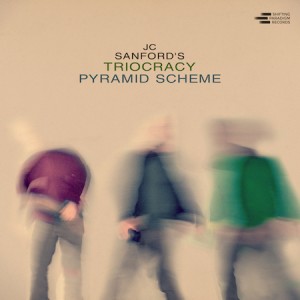 Trombonist JC Sanford’s new ensemble is not for everyone. The lack of a rhythm section immediately will deter plenty of listeners who might come expecting moody drones or cerebral quacking and squawking. Neither are to be found here. In fact, Triocracy’s music is reminiscent of the World Saxophone Quartet or WSQ member Julius Hemphill’s sextet.

Pyramid Scheme sets its tone early with “Rip Tide,” a piece built on a three-note unison fanfare, repeated three times, followed by a slowly unfolding harmonic dance, each horn turning slowly in its own space. Eventually, staccato outbursts from all three players lead to a jabbering mock debate, each player attempting to drown out their bandmates without ever erupting into a full-on scream. The next piece, a version of Billy Joel’s “And So It Goes,” is more elegiac and processional, like something you’d hear sung at a funeral for a beloved schoolteacher. Despite there being no rhythm instruments, the music manages to maintain a powerful pulse at times: “Everything We’ve Always Wanted” has an almost Duke Ellington-like sway, and in its latter half, “Manic” features a churning low end from the trombone and baritone saxophone that might remind listeners of Mats Gustafsson’s work. Even when the players choose to tootle and coo, as on mellow pieces like the chamber-folkish version of “Sarabande,” things are never boring. And while the three short improvisations here initially might seem like technical exercises, given titles like “Something Chordal (Improvisation 4),” they don’t feel that way.