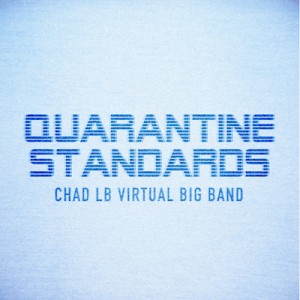 In executing the Chad LB Virtual Big Band project, Lefkowitz-Brown drew upon his experience in New York-based large ensembles like the Birdland Big Band, the Jason Marshall Big Band and Arturo O’Farrill’s Afro Latin Jazz Orchestra, as well as his own skills at home recording and his knack for reaching audiences via online platforms. It was no small feat, and Lefkowitz-Brown proves to be the perfect artist to spearhead such a venture, judging by the quality and spirit of the music on Quarantine Standards.

Ensemble passages are tight and dynamic, with plenty of locked-in swing feeding the collective feel of a traditional big band and helping to erase any sense of physical isolation. In choosing an all-standards program, Lefkowitz-Brown gave his virtual band members a shared language to work with and some common ground to stand upon, boosting the group’s chances of success in overcoming the barriers imposed by quarantine-like coronavirus safety standards.

The album serves as a fine showcase for the bandleader’s instrumental prowess, as he takes the lead voice on several tracks and solos prolifically throughout the program. Highlights include “Giant Steps,” which opens with a gripping tenor saxophone improvisation; a rapturous take on “My One And Only Love” that reveals the romantic side of Lefkowitz-Brown, who woos and coos over lush ensemble passages; and closer “Cherokee,” an uptempo favorite that brings the leader and alto saxophonist Andrew Gould together for some adrenaline-fueled solo trading.