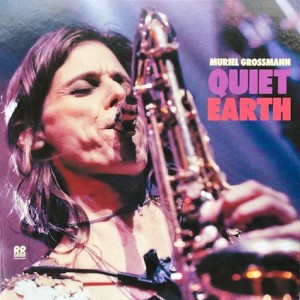 With a steady stream of records flowing since 2007, the work of Ibiza, Spain-based saxophonist Muriel Grossman invokes nature as easily as the sturdy history of spiritual-jazz.

Following Reverence, where the bandleader sought to merge the “reassuring elements of spiritual-jazz” with its antecedents, Grossman returns with an album that examines her own development along the music’s continuum. Two of the compositions on Quiet Earth, though, first appeared on Awakening, a live recording from the 2011 Eivissa Jazz Festival that featured freedom-focused drummer Christian Lillinger behind the kit.

“After reflecting on my musical search, I could see that ‘Wien’ and ‘Peaceful River,’ songs from 10 years ago, [hinted at my] transition from more avant-garde to more spiritual-jazz,” Grossmann wrote in an email to DownBeat. “I wanted to give these songs more weight, since they mark this important transitional step.”

Nuanced arrangements make even a couple of retreads—set alongside the title track and another fresh, extended composition titled “African Call”—seem new.

The arrangement of “Peaceful River” here has a more succinct form, its original tentative middle section replaced by a constant swing. Guitarist Radomir Milojkovic continues to factor into the ensemble sound, comping where straightahead acts likely would have a pianist slotted. Adding in organist Llorenc Barcelo for her past few albums, Grossmann has deepened her compositional ambition and solidified sonic connections to the music’s roots in the ’60s.

While Quiet Earth largely functions as a vehicle for Grossman’s exhortations—indulging supple mutations of thematic material, though never fully cutting free—she’s cemented her voice and refined her sonic purpose.