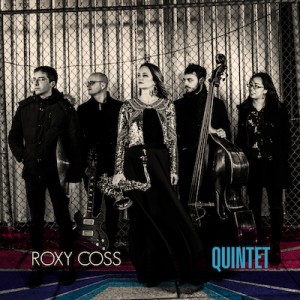 Roxy Coss is an artist who writes and performs with undeniable intention.

Energized after the 2016 election and looking to merge her music with activism, the Seattle-born Coss released last year’s defiant The Future Is Female (Posi-Tone), a hard-hitting collection of post-bop with pointed titles like “#MeToo” and “Nevertheless, She Persisted.” The titles both referenced and answered the culture’s ongoing reckoning with misogyny, an issue that still unquestionably taints the medium of jazz. A year earlier, Coss also founded the Women in Jazz Organization, a group aimed at addressing inequities in and around the music, and supporting performers.

Now, with a new, hard-to-resist album simply called Quintet, Coss continues speaking out with a battery of songs taken primarily from her back catalog.

“Don’t Cross The Coss” begins the set at a sprinter’s pace, swerving through a tangled melody framed by Miki Yamanaka’s Fender Rhodes and guitarist Alex Wintz, who provides a welcome melodic counterpoint alongside Coss’ burly, nimble tone. At times, her sound can recall saxophone colossi like Joe Henderson and Sonny Rollins, but some unexpected changes of pace and tone keep Coss’ vision fixed forward.

Previously heard on The Future Is Female, the politically charged “Mr. President” begins as a militaristic march through dissonance and darkness, but Coss allows ample room for light, culminating with a stormy turn on tenor as the rhythm section—drummer Jimmy Macbride and bassist Rick Rosato—push the group toward a compelling argument for uplift that never stays settled. The set’s only standard, “All Or Nothing At All,” boldly quickens a pace once set by Coltrane, with Wintz’s churning guitar and Yamanaka’s textured keyboard lighting the way for Coss’ twisting soprano saxophone.

The ballad “Enlightenment” doesn’t distinguish itself so readily, however, feeling more hemmed in by a straightforward, nocturnal pace that finds fewer surprises amid the more wide-open ventures elsewhere. But with “Breaking Point,” Coss’ restlessness is restored as her horn weaves in and out of formation with Wintz on a barbed melody as Yamanaka’s keyboard provides an insistent pulse. “Females Are Strong As Hell” closes the record on a bold note, with an unhurried—but quicksilver—Coss leaving no doubt as to the veracity of its title.

With the bandleader’s well-earned place in the music, jazz—the people who comprise its ranks as performers, fans and critics—is coming closer to a long-overdue understanding of what an innovative bandleader can look like. Quintet might not carry a title that functions so cleanly as a mission statement when contrasted with its predecessor, but as a summation of Coss’ assured vision, it leaves little doubt that the future is now.