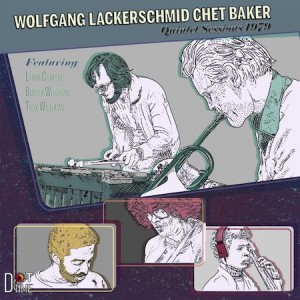 Chet Baker. Larry Coryell. Buster Williams. Tony Williams. Wolfgang Lackerschmid. One of these names is not like the other, which raises the question: How did Lackerschmid, a solid if little-known vibes player from Germany, end up fronting such a stellar quintet?

In 1978, Lackerschmid met Baker at a festival near Munich, and mentioned he was working on some duets for trumpet and vibraphone. When Baker expressed interest, Lackerschmid arranged the studio session that produced Ballads For Two, which was reissued by Dot Time in 2018.

Flash forward a few months. Larry Coryell catches the Lackerschmid/Baker duo live and expresses interest in recording with them. Lackerschmid jokes that he’d do it if they had a drummer and bassist named “Williams.” A few weeks later, Baker’s manager lands Tony Williams and Buster Williams, and a session is convened.

If only the music itself were so full of serendipity. Although Lackerschmid more than holds his own, offering a nicely funky turn on Tony Williams’ “Mr. Biko” and perfectly rendering the dreamy mood of Coryell’s “Rue Gregoire Du Tour,” Baker barely registers. He plays some quietly pretty lines on “Here’s That Rainy Day,” but otherwise seems content to ride the rhythm section’s energy. Not that listeners should blame him: Both Williamses are on fire throughout, hard-swinging and giddily polyrhythmic, while Coyrell’s solos are soulful and incendiary. This reissue adds a pair of previously unheard alternate performances, pumping up the playing time to a respectable 48 minutes.