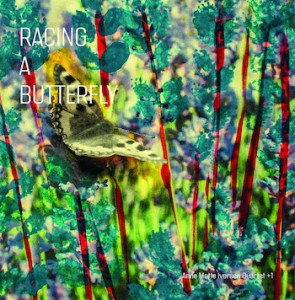 Any notion that the word “butterfly” in the album’s title signifies the record being a light and fluttery offering immediately is quashed by the opening “Triangular Waves,” a jolting injection of jagged energy. Everything—the thrusting ostinato that holds center stage, the heady lines that saxophonist John Ellis and trombonist Peter Dahlgren chase each other through, the interplay of the leader’s bass and Otis Brown III’s drums, and the propulsive block chording by pianist Danny Grissett—locks perfectly into place.

That remarkable level of cohesion is the mark of a band that has been shaping its sound for almost 20 years, and it should be enough to make Anne Mette Iversen much better known. A co-founder of Brooklyn Jazz Underground, the bassist made a mark on the New York scene in the early aughts, but has had a lower profile in the mainstream since relocating to Berlin in 2012.

Her writing here is never less than melodious, often returning to the ostinato as a signature. But even ballads—like the first part of “Parallel Flying”—maintain tensile strength because of the resonance of her bass and the grit in everything Dahlgren plays. In fact, much of Racing A Butterfly calls to mind the brawny bustle of Art Blakey’s Jazz Messengers—particularly the Curtis Fuller years, thanks to Wahlgren’s presence and the way he trades phrases with Ellis. Iversen’s unfussy playing forms a firm central element and provides Brown the freedom to improvise a number of unexpected routes. His fleet touch is as close as this set comes to resembling a butterfly.