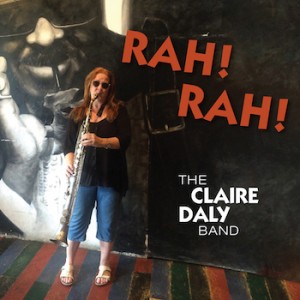 Claire Daly was only 18 when she sat spellbound for several days watching multi-horn master Rahsaan Roland Kirk during a jazz workshop residency in Boston, a life-changing experience that set her on her own artistic path. After studying tenor and alto saxophone at Berklee, she picked up a baritone nearly as big as she was, which (along with flute) became her primary instrument. Though Kirk was baked into her playing, it wasn’t until 2008 that Daly paid tribute to her mentor with Rah! Rah!, a limited-edition self-released title. Twelve years later, that record gets its due with a reissue that sounds as fresh as the day it was recorded.

From the opener “Blue Lady,” Daly’s own spin on Kirk’s “Lady’s Blues,” she and her longtime band hit every station of the Rahsaan cross. Her witty flute takes flight on Kirk’s “Serenade To A Cuckoo” and plays tag with Dave Hofstra’s bass on “Funk Underneath.” There are also some fun surprises. Midway through the iconic “Volunteered Slavery,” Daly bursts into Sly & The Family Stone’s “Everyday People,” an out-of-left-field kind of maneuver at which Kirk himself excelled. Less successful is Daly’s decision to jettison Kirk’s rich instrumental version of “Alfie” in favor of a take with her rather thin vocals; she wisely keeps “I’ll Be Seeing You” as an all-instrumental closer. But she shines brightly on “Momentus Brighticus,” Daly’s homage to “Bright Moments,” in which her flute soars above Eli Yamin’s manic piano runs before gliding back to earth. It’s a real passing-the-torch moment, and Daly and her band deliver.