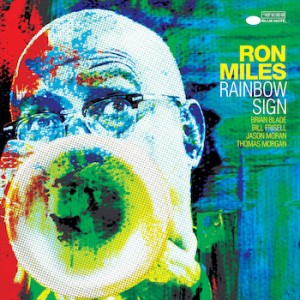 I Am A Man, Ron Miles’ previous album, upped the cornetist’s game by expanding his trio with guitarist Bill Frisell and drummer Brian Blade into a quintet by adding pianist Jason Moran and bassist Thomas Morgan. But that seems almost a baby step compared to Rainbow Sign, which ups the ante through the writing’s richness—by far Miles’ most impressive work as a bandleader.

Much of the album was composed in summer 2018, when his father passed, bringing an emotional resonance to the music. There’s also a lot of storytelling, and that emphasis is what most informs the playing here. In his trio albums with Frisell and Blade, Miles underscored the equality of the playing, so that none of the three had their role defined by the instrument they played. Rainbow Sign doesn’t merely expand that concept to quintet size, it expands it to encompass richly detailed and deeply integrated composition, creating a sense of communality that evokes the free interplay of collective improvisation and the structural focus of ensemble writing.

Perhaps the most epic example is “Like Those Who Dream,” an almost 16-minute journey shot through with stunning solos and perfectly choreographed group interactions, all solidly grounded in the blues. But there’s also the subtlety and wit of “Custodian Of The New,” which is built around stuttering, time-bending phrases the players take turns completing; and the dreamy lyricism of “The Rumor,” in which a guitar line that could have fallen out of a Ron Howard movie is supported by intricate, melodic time-keeping. Rest assured, there’s plenty of gold at the end of this rainbow.