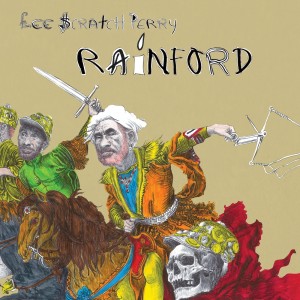 The veracity of all those stories you’ve heard or read about Lee “Scratch” Perry is immaterial. The 50-plus years of music the producer and vocalist has worked on is legitimately awe-inspiring. And the fact that he has continued releasing work at a pretty steady clip only adds to the respect he should be afforded.

Of course, most of the recordings under his own name—not Prince Buster, The Wailers, The Congos and scores of other collaborators—are difficult to keep track of, being strewn across hundreds of releases. But Perry’s relationship with On-U Sound’s Adrian Sherwood, a UK dub provocateur, has yielded dozens of albums since the 1980s. Granted, it’s not all on par with Return of The Super Ape, but most music isn’t.

Rainford opens with the whir of crickets, turns to a song about evil spirits that sports a familiar riddim and slowly advances toward “African Spaceship,” a tune with what sounds like a weird, pitched-down guitar, making it seem as if a late-’90s El-P production has been unearthed. A few more novel sonic moments crop up, but Rainford’s really about extending an astounding reggae legacy more than further innovations. It’s all marked with history, and Perry, now 83, has to understand that he doesn’t have another dozen albums left in him.

The closer, “Autobiography Of The Upsetter,” intimates that.

The Grammy winner tells listeners that his father was a Freemason, and that his parents wanted to create a “Godly being.” The song’s refrain, “I am the Upsetter,” is a simple statement of purpose as Perry goes on to explain that he’s on the planet to eradicate racism. That might be a bit of a stretch, but seeing his writing credit on the back of The Clash’s 1977 debut long-player likely expanded the minds of at least a few impressionable punks.