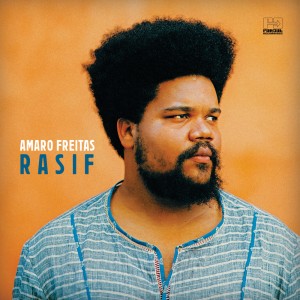 Brazilian pianist Amaro Freitas has developed an approach to the keyboard that’s so unique it’s startling. On his first album, 2016’s Sangue Negro, he was a heavy-handed and romantic player in the vein of Aaron Parks. His bassist and drummer of choice, Jean Elton and Hugo Medeiros, set up a powerful rhythmic bed that seemed to take very little from the music of their home country; even a piece called “Samba De César” packed more punch than that typically breezy style usually permits. On Rasif, though, Freitas is in an entirely different realm. His compositions are built of cells arranged into intricate patterns, like a cross between the clockwork funk of Nik Bärtsch’s Ronin and the jackhammering post-bop of the Matthew Shipp Trio.

Midway through the opening track, “Dona Eni,” Medeiros launches into a maracatu, the thundering, militaristic parade-ground rhythm from Brazil’s Pernambuco region. A traditional maracatu might number between 80-100 drummers, but Medeiros does all the work himself. Even on more conventionally swinging pieces like “Paço” or “Mantra,” his drumming churns up the earth, as Freitas digs deep into looping patterns that gradually spin out into abstraction.

On the final two tracks, “Plenilúnio” and “Afrocatu,” the album expands its scope when Henrique Albino joins the ensemble. On the former, he overdubs multiple flutes and baritone saxophone for a piece that’s nearly symphonic in scope. The latter is another hard-charging vamp, on which he plays a buzzing clarinet atop another tidal wave of clattering Medeiros percussion.

Rasif has a lot going and all of it’s exciting.