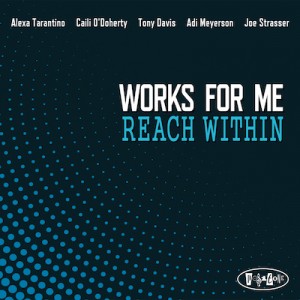 Works For Me, a Posi-Tone organized ensemble of next-generation players, opens its first full-length album with a Joe Henderson tune from 1963 and ends on a Stevie Wonder cover that’s a bit too pumped full of sucrose for what most listeners might need—or want.

Stuffed between those tracks, though, is the straighahead work of an emerging group that’s looking to keep jazz from becoming an anachronism while investigating their own day-to-day lives.

Pianist Caili O’Doherty’s “Salt And Vinegar”—seemingly a paean to a delicious potato chip—reflects the collective ensemble’s relative youth and playfulness, as Alexa Tarantino’s soprano saxophone solo bumps up against the writer’s hard-swinging feature. “Lake Sebago” nods to bucolic escapes in Maine as it benefits from Tarantino’s alto flute intoning deep lines that weave in and out of guitarist Tony Davis’ melodic bedding. It’s one of two compositions the guitarist contributes here, the other being the much bluesier “El Gran Birane.”

The one player who might be considered a veteran here is Joe Strasser, a drummer who started contributing to recordings by Sam Yahel and Ken Fowser during the late ’90s. Strasser and bassist Adi Meyerson enable the group to explore and display the personalities of all involved as the five-piece band merges sketches of 21st-century life with an ennobling 100-year-old tradition.