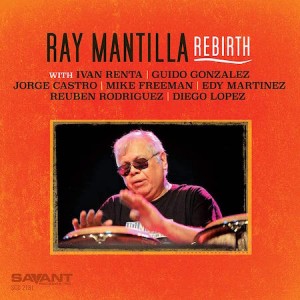 Rarely do we get a precious gift from such a talented artist so close to their departure. A few months before his death on March 21 at age 85, prolific percussionist and Latin jazz icon Ray Mantilla approved the final mix of the tracks that appear on Rebirth. This album is the coda to a long career that included collaborations with Ray Barretto, Art Blakey, Dizzy Gillespie, Freddie Hubbard, Herbie Mann, Charles Mingus, Eddie Palmieri, Max Roach, Bobby Watson and many others.

The album title, which Mantilla chose, nods to the fact that during the last two years of his life, he was able to bounce back from a bout with cancer. The South Bronx native enthusiastically took his congas and other percussion instruments into the studio for what would be his final leader sessions, working with such longtime colleagues as Edy Martinez (piano, Fender Rhodes), Guido Gonzalez (trumpet, flugelhorn) and Ivan Renta (soprano and tenor saxophones).

Earworms abound on Rebirth. The version of Tito Puente’s “Philly Mambo” is so kinetic and catchy it could be the soundtrack to a nationwide exercise program. (Is it physically possible to stand still as Mike Freeman pounds out those hypnotic vibraphone riffs?) Martinez wrote nearly all the arrangements here, including a hip-swaying rendition of “Hit The Road Jack” spiced with staccato brass and woodwind blasts. Elsewhere, Freeman’s arrangement of the 1975 Bobby Hutcherson classic “Yuyo” is a delirious dose of sheer joy, while “Cumbia Jazz Fusion Experimental” evokes a mood of mystery, with Jorge Castro’s flute adding wondrous coloration.

The most outside-leaning cut here is the closer, “Rebirth Bata Rumba Experimental,” a percussion-heavy excursion that features Diego Lopez, Ogudaro Díaz and Rafael Monteagudo all playing batá drums. This, the last song on Mantilla’s final album, is the only original composition in the program. It’s a lovely farewell note from an irreplaceable player.