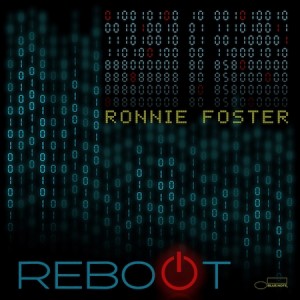 Let’s address the history up top. When you’re talking funky-’70s Blue Note titles, you’re talking Two Headed Freap. With the pulsing “Chunky” and sultry “Mystic Brew,” organ whiz Ronnie Foster’s ’72 label debut (newly reissued on vinyl) is one of the era’s archetypal groove discs, able to tickle you silly while kicking your ass. And guess what? These classiques ain’t anomalies. A half century later, after helping Stevie Wonder cut Songs In The Key Of Life and George Benson make Breezin’, Foster still has a way of blending funk and swing into a zesty romp.

The 72-year-old keyboardist’s first album in 36 years has the kind of swag that has long helped soul-jazz dates get over the hump. Meaning the songs have to be solid enough to house the flash of the solos and give the rhythm section room to frolic. These elements, each meant to forge pleasure, define Reboot. Cocky and catchy “Swingin’” and the title track check the essential boxes. And though it’s little more than a sketch, “J’s Dream” is a bittersweet gem built on an earworm.

The leader’s trademark oomph secures an unwavering spot in the foreground. Insightful ploys on “Isn’t She Lovely” and “After Chicago” remind us of the sly moves that dot his canon. The aggressive beats and Latin percussion of “Carlos” are feisty enough to position it as an Abraxas outtake, and the elegaic solo piano piece that closes the record suggests that Foster glances in several directions at once. No question, versatility and authority are the through lines of this reboot.